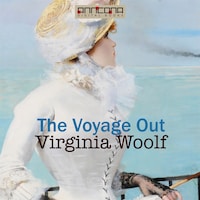 The Voyage Out is the first novel by Virginia Woolf, published in 1915. It is one of Woolf's wittiest social satires.

The novel had a long and difficult gestation and was not published until 1915. It was written during a period in which Woolf was especially psychologically vulnerable. She suffered from periods of depression and at one point attempted suicide. The resultant work contained the seeds of all that would blossom in her later work: the innovative narrative style, the focus on feminine consciousness, sexuality and death.

Rachel Vinrace embarks for South America on her father's ship and is launched on a course of self-discovery in a kind of modern mythical voyage. The mismatched jumble of passengers provide Woolf with an opportunity to satirize Edwardian life. The novel introduces Clarissa Dalloway, the central character of Woolf's later novel, Mrs. Dalloway.

E. M. Forster described it as ”... a strange, tragic, inspired book whose scene is a South America not found on any map and reached by a boat which would not float on any sea, an America whose spiritual boundaries touch Xanadu and Atlantis... It is absolutely unafraid... Here at last is a book which attains unity as surely as Wuthering Heights, though by a different path."