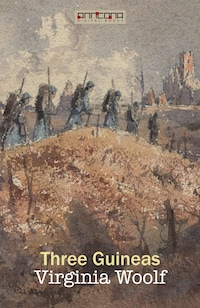 Three Guineas is a book-length essay by Virginia Woolf, published in June 1938.

Although Three Guineas is a work of non-fiction, it was initially conceived as a ”novel-essay" which would tie up the loose ends left in her earlier work, A Room of One's Own. The book was to alternate between fictive narrative chapters and non-fiction essay chapters, demonstrating Woolf's views on war and women in both types of writing at once. This unfinished manuscript was published in 1937 as The Pargiters.

When Woolf realised the idea of a "novel-essay" wasn't working, she separated the two parts. The non-fiction portion became Three Guineas. The fiction portion became Woolf's most popular novel during her lifetime, The Years, which charts social change from 1880 to the time of publication through the lives of the Pargiter family. It was so popular, in fact, that pocket-sized editions of the novel were published for soldiers as leisure reading during World War II.

The entire essay is structured as a response to an educated gentleman who has written a letter asking Woolf to join his efforts to help prevent war.

Woolf wrote the essay to answer three questions, each from a different society:

1. From an anti-war society: "How should war be prevented?"

2. From a women's college building fund: "Why does the government not support education for women?" (Actually, the fund was a metaphor for family private funds to send the "boys of the family" to college and not the women.)