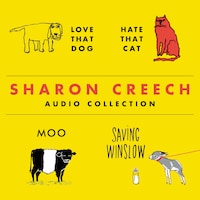 Newbery Medal-winning author Sharon Creech is a master of both prose and verse. Her standout tales are full of love, friendship, and what it means to be kid figuring out who you are. Enjoy this audio exclusive collection of four of her best-loved novels!

New York Times bestseller Love That Dog shows how one boy named Jack finds his voice with the help of a teacher, a pencil, some yellow paper, and of course, a dog. Written as a series of free-verse poems from Jack's point of view, and with classic poetry included in the back matter, this novel is perfect for kids and teachers, too.

Jack hates poetry. Every time he tries to write, his brain feels empty. But his teacher, Miss Stretchberry, won't stop giving her class poetry assignments—and Jack can't avoid them. But then something amazing happens. The more he writes, the more he learns that he does have something to say.

Return to Miss Stretchberry's class in this New York Times bestseller featuring Jack, the reluctant poet, who over the course of a year encounters new and challenging things like metaphors, alliterations, onomatopoeia, and one mean fat black cat!

Jack is only trying to save that fat black cat stuck in the tree by his bus stop—but the cat scratches him instead! At school Miss Stretchberry begins teaching new poems, everything from William Carlos Williams to Valerie Worth to T.S. Eliot.

As the year progresses, Jack gradually learns to love that cat and finds new ways to express himself.

This uplifting New York Times bestseller reminds us that if we’re open to new experiences, life is full of surprises.

When twelve-year old Reena, her little brother, Luke, and their parents first move to Maine, Reena doesn’t know what to expect. She’s ready for beaches, blueberries, and all the lobster she can eat. Instead, her parents “volunteer” Reena and Luke to work for an eccentric neighbor named Mrs. Falala, who has a pig named Paulie, a cat named China, a snake named Edna—and that stubborn cow, Zora.

This heartwarming story, told in a blend of poetry and prose, reveals the bonds that emerge when we let others into our lives.

Perfect for fans of Charlotte’s Web and The One and Only Ivan, Saving Winslow is an uplifting modern classic about a young boy who befriends an ailing newborn donkey and nurses him back to health.

Louie doesn't have the best luck when it comes to nurturing small creatures. So when his father brings home a sickly newborn mini donkey, he's determined to save him. He names him Winslow. Taking care of him helps Louie feel closer to his brother, Gus, who is far, far away in the army.

Everyone worries that Winslow won't survive, especially Louie’s quirky new friend, Nora, who has experienced loss of her own. But as Louie's bond with Winslow grows, surprising and life-altering events prove that this fragile donkey is stronger than anyone could have imagined.