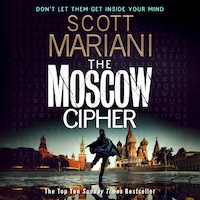 ‘If you like your conspiracies twisty, your action bone-jarring, and your heroes impossibly dashing, then look no farther’ Mark Dawson

When twelve-year-old Valentina fails to return from a visit to her father in Moscow, alarm bells start ringing. Her rich and powerful family know there’s one man they can depend on to bring her back safe: former SAS major Ben Hope.

But what starts off as an apparently straightforward case of parental child abduction quickly takes on more sinister dimensions as Ben travels to Moscow and starts to investigate the whereabouts of Valentina and her father, Yuri – a man with a hidden past not even his ex-wife knows about.

Now that past has caught up with him, it’s not only Yuri’s life that is in danger, but Valentina’s too. If Ben Hope can’t save them, nobody can.

Whilst the Ben Hope thrillers can be read in any order, this is the seventeenth book in the series.