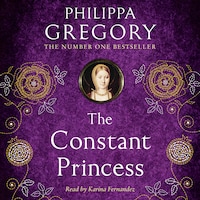 A splendid and sumptuous historical novel from the internationally bestselling author, Philippa Gregory, telling of the early life of Katherine of Aragon.

As a little girl Katherine of Aragon was betrothed to Arthur, Prince of Wales, the eldest son of Henry VII of England, and was raised in the palace of the Alhambra, knowing that she would be queen of England.

In 1501, the teenage Spanish princess arrives in her new kingdom, but the future is turned upside down with the death of her handsome young husband – only six months after the wedding.

Transformed from beloved bride to superfluous widow, Katherine endures hardship and loneliness as the Tudor court slowly squeezes her out of royal circles. But Katherine never forgets her promise to her young husband that she would be a good Queen of England; and Katherine is determined not to fail, even if it means the greatest lie in English royal history…

With an exclusive afterword written and read by Philippa Gregory, exploring the inspiration behind The Constant Princess.