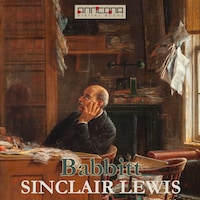 Babbitt by Sinclair Lewis was first published in 1922.

Sinclair Lewis’ George F. Babbitt is a complicated and conflicted character. When you think you have his next move figured out he surprises you. As you begin to like him, he does something to evoke the “what a rat” response.

Male menopause wasn’t a pre Great Depression term, but I would say George has all the symptoms. At a pudgy balding forty six he looks at his life, wife, family and business. He sees himself as a pretty successful business man, but when Tanis, the lonely widow, has a leaky roof, he sees an opportunity for perhaps a more fulfilling relationship then he has at home. Add to Tanis a foray into radical politics, and we are about to whiteness an emotional and financial train wreck with Babbitt at the throttle.

This is a long story, but well worth listening to. Human nature hasn’t changed much in the last ninety years.

Largely a satire of American culture, society, and behavior, it critiques the vacuity of middle-class American life and its pressure toward conformity. An immediate and controversial bestseller, Babbitt was influential in the decision to award Lewis the Nobel Prize in literature in 1930.

In 1930, he became the first writer from the United States to receive the Nobel Prize in Literature, which was awarded "for his vigorous and graphic art of description and his ability to create, with wit and humor, new types of characters."

His works are known for their insightful and critical views of American capitalism and materialism between the wars. He is also respected for his strong characterizations of modern working women.