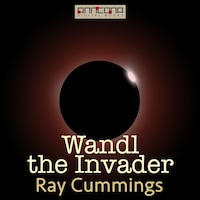 Wandl the Invader is a science fiction novel by American author Ray Cummings first serilised in Astounding Stories in 1932.

There were nine major planets in the Solar System and it was within their boundaries that man first set up interplanetary commerce and began trading with the ancient Martian civilization. And then they discovered a tenth planet--a maverick!

This tenth world, if it had an orbit, had a strange one, for it was heading inwards from interstellar space, heading close to the Earth-Mars spaceways, upsetting astronautic calculations and raising turmoil on the two inhabited worlds.

But even so none suspected then just how much trouble this new world would make. For it was WANDL THE INVADER and it was no barren planetoid. It was a manned world, manned by minds and monsters and traveling into our system with a purpose beyond that of astronomical accident!

Having worked for Thomas Alva Edison, Ray Cummings was inspired by science’s possibilities and began to write science fiction.

His most highly regarded work was the novel The Girl in the Golden Atom published in 1922. His career resulted in some 750 novels and short stories, using also the pen names Ray King, Gabrielle Cummings, and Gabriel Wilson.