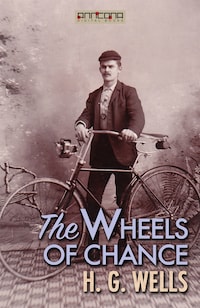 The Wheels of Chance

The Wheels of Chance is an early (1896) comic novel by H. G. Wells about an August 1895 cycling holiday, somewhat in the style of Three Men in a Boat.

The Wheels of Chance - A Bicycling Idyll follows the adventures of a Drapers Assistant who, having brought an ancient bicycle, sets off on a 2 week tour of the countryside. And his world will never be the same again.

The Wheels of Chance was written at the height of the cycling craze (1890–1905), when practical, comfortable bicycles first became widely and cheaply available and before the rise of the automobile.

The advent of the bicycle stirred sudden and profound changes in the social life of England. Even the working class could travel substantial distances, quickly and cheaply, and the very idea of travelling for pleasure became a possibility for thousands of people for the first time.

This new freedom affected many. It began to weaken the rigid English class structure and it gave an especially powerful boost to the existing movement toward female emancipation. Wells explored these social changes in his story.

In 1922 it was adapted into a silent film The Wheels of Chance directed by Harold M. Shaw.