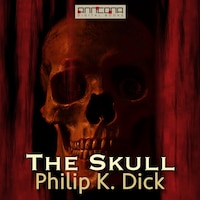 The Skull is a science fiction short story by Philip K. Dick, first published in 1952.

Conger agreed to kill a stranger he had never seen. He wasn't concerned about getting the wrong man. He knew what the man looked like. There was no way he could make a mistake about his target's identity -- he had the man's skull under his shoulder.

The Skull is a skilful mesh of time travel, unscrupulous governments, prisoners, and religion. With an assassin thrown in for good measure.

The Skull was first published in If Worlds of Science Fiction September 1952.