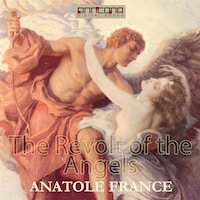 The Revolt of the Angels

The Revolt of the Angels is a 1914 novel by French Nobel laureate Anatole France.

Anatole France, in his satirical and allegorical fashion, weaves a tale of fantasy which finds a mischievous guardian angel stealing books from his earthly charge, who happens to be an archbishop in possession of a plethora of literature, mostly theological in nature.

After voracious reading and then becoming a "fallen" angel, he decides to search for and recruit other "fallen" angels who devise a plan to attempt an overthrow of the rule which had set their fate, realizing that revolt is necessary and inevitable.

What follows is preparation for a battle to revenge what has befallen them (and mankind itself). But surprises find their way into the plans, as well as the question that if they win the war, what will change? -

Anatole France, (1844-1924), was a French poet, journalist, and novelist. He was born in Paris, and died in Saint-Cyr-sur-Loire. He was a successful novelist, with several best-sellers. Ironic and skeptical, he was considered in his day the ideal French man of letters.

He was a member of the Académie française, and won the 1921 Nobel Prize for Literature "in recognition of his brilliant literary achievements, characterized as they are by a nobility of style, a profound human sympathy, grace, and a true Gallic temperament".