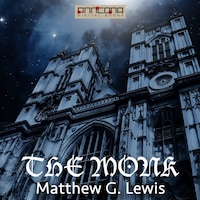 The Monk: A Romance is a Gothic novel by Matthew Gregory Lewis, published in 1796. A quickly written book from early in Lewis's career (it was written in ten weeks, before he turned 20), its convoluted and scandalous plot has made it one of the most important Gothic novels of its time, often imitated and adapted for the stage and the screen.

The Monk: A Romance is a story of frustrated and unrequited desire between mentor and pupil mixed with elements of the supernatural. It includes several subplots: rape, torture and incest. It is the old story of the forces of good versus the forces of evil, except that in this one evil comes out ahead.

When The Monk was first published in 1795, it was received well by readers and reviewers causing a second edition to be printed the following year. But by the third year, there began a growing criticism of the book and of Lewis mostly on the basis of immorality. In fact, the book caused such a scandal that Lewis published another version complete with redactions and entire rewrites so as to remove the shame it had brought upon his family and the political institution of which he was a part.

The Monk finds itself straddling the genres of Gothicism and Decadence, and includes elements of Romanticism. Lewis also chose to blend the roles of gender in this work--particularly in the character of Rosario/Matilda. The sexual tension between Ambrosio and this character--along with the eventual revelation of true identity--are an exposé on the topic of same-sex love and makes this work an early contribution to LGBT literature.

In spite of the mountains of criticism against the book, it remained a best seller well into the 19th century. This version is the unexpurgated version including all of the “scandal and immorality” of the original.