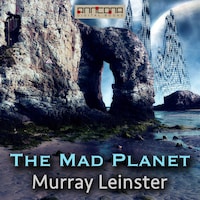 The Mad Planet is a science fiction short novel by Murray Leinster first published in 1920.

It is 30,000 years following dramatically changed climate conditions on earth which had let massive amounts of carbon dioxide belch from the interior of the planet into the atmosphere.

Over the millenia this would have quite devastating effects on life as it had once been known. Much of the human and animal population would not survive the climate change, and indeed those few humans who did survive knew nothing of all which their predecessors had learned and built. Indeed, they knew not even of their existence. On the other hand insects and fungi would flourish over time.

And so those few remaining humans were unknowingly at the very beginning of the building of a tribal society, which at the time of the story of Burl simply meant food and survival.

And so it was Burl who chose to travel beyond his small tribal community in an effort to hunt for something new and different to hopefully impress Saya, the young female of his tribe to whom he felt a peculiar attraction. The Mad Planet is Burl's adventure.

Murray Leinster (1896-1975) was a pen name of William Fitzgerald Jenkins, an award-winning American writer of science fiction and alternate history. He wrote and published over 1,500 short stories and articles, 14 movie scripts, and hundreds of radio scripts and television plays.