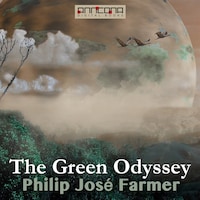 The Green Odyssey is a science fiction novel by Philip José Farmer first published in 1957.

The Green Odyssey is a relatively straightforward adventure story, involving an astronaut named Alan Green who is stranded on a primitive planet, where he is claimed as a gigolo by an insipid and smelly duchess and is married to a slave woman. His slave-wife, though beautiful and smart, nags him constantly.

He’s given up hope of ever returning to Earth when he hears of two astronauts who have been captured in a kingdom on the other side of the planet, and sets out on an action-packed journey on a ship sailing across vast grasslands on rolling pin-like wheels in a desperate scheme to save them and return home.

The Green Odyssey was Farmer's first book-length publication. Unlike Farmer's most prolific earlier short story work, this book contains no sexual themes. The novel also appeared in the back ground of the first episode of The Twilight Zone.

Philip José Farmer (1918-2009) was an American author, principally known for his award-winning science fiction and fantasy novels and short stories. Farmer is best known for his sequences of novels, especially the World of Tiers (1965–93) and Riverworld (1971–83) series. He is noted for the pioneering use of sexual and religious themes in his work, his fascination for, and reworking of, the lore of celebrated pulp heroes, and occasional tongue-in-cheek pseudonymous works written as if by fictional characters. Farmer often mixed real and classic fictional characters and worlds.