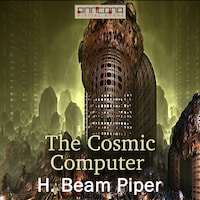 The Cosmic Computer is a science fiction novel by H Beam Piper first published in 1963.

Conn Maxwell told them: "There are incredible things still undiscovered; most of the important installations were built in duplicate as a precaution against space attack. I know where all of them are.

"But I could find nothing, not one single word, about any giant strategic planning computer called Merlin!"

Nevertheless the leading men of the planet didn't believe him. They couldn't, for the search for Merlin had become their abiding obsession. Merlin meant everything to them: power, pleasures, and profits unlimited.

Conn had known they'd never believe him, and so he had a trick or two up his space-trained sleeve that might outwit even their fabled Cosmic Computer ... if they dared accept his challenge.

A story about the search for Merlin - a super computer once used for military purposes.

Conn Maxwell returns from Terra to his poverty-stricken home planet of Poictesme, "The Junkyard Planet", with news of the possible location of Merlin, a military super-computer rumored to have been abandoned there after the last war.

The inhabitants hope to find Merlin, which they think will be their ticket to wealth and prosperity. But is Merlin real, or just an old rumor? And if they find it will it save them, or tear them apart?

The Cosmic Computer was also published with the title Junkyard Planet.