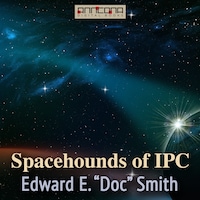 Spacehounds of IPC is a science fiction novel and space opera by American author E. E. ”Doc” Smith. It was first published in 1931.

When the Inter-Planetary Corporation's (IPC) crack liner “IPV Arcturus” took off on a routine flight to Mars, it turned out to be the beginning of a unexpected and long voyage.

There had been too many reports of errors in ship's flight positions from the Check Stations and brilliant physicist Dr. Percival (“Steve”) Stevens is aboard the Arcturus on a fact-finding mission to find out what's really happening, and hopefully save the honor of the brave pilots of the space-liner Arcturus from the desk-jockeys' in the Check Stations implications of imprecision - the nastiest insult you could cast at a ships pilot.

He and the pilots are right, it was the Check Stations that were out of position, not the ships. But that's cold consolation because before the Arcturus reaches Mars it's attacked by a small, mysterious, globe shaped spaceship.

The novel was originally serialized in the August, September and October issues of the magazine Amazing Stories in 1931.

Earlier "Doc" Smith had written the first great novels of interstellar exploration, the Skylark series, and later he created another sweeping multi-volume series about the Galactic Patrol in the Lensman series.

But this story, Spacehounds of IPC, stands alone. Although it has many similarities to the Lensmen series, the technology and the lifeforms in the story cannot be reconciled with the universe of the Lensmen. The story was the first to use the term "tractor beam", a name and concept that has been adopted by many subsequent literary works of fiction and other media until the present day.

Edward Elmer Smith (also E. E. Smith or E. E. "Doc" Smith; 1890-1965) was an American food engineer (specializing in doughnut and pastry mixes) and an early science-fiction author, best known for the Lensman and Skylark series. Smith's novels are generally considered to be classic space operas, and he is sometimes called the first of the three "novas" of 20th-century science fiction (with Stanley G. Weinbaum and Robert A. Heinlein as the second and third novas).