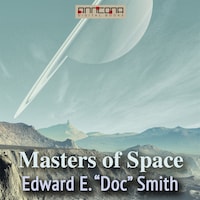 Sometime in the future Jarvis Hilton is placed in charge of a team of scientists on a space mission called Project Theta Orionis in order to obtain uranexium ore for Earth. Little does he know that they're gonna have to encounter strange telepathic like robots, weird planets, a war, and to top it all off, become super humans...

The Masters had ruled all space with an unconquerable iron fist. But the Masters were gone. And this new, young race who came now to take their place--could they hope to defeat the ancient Enemy of All?

Masters of Space was first serialized in Worlds of If November 1961 and January 1962.

Edward Elmer Smith (also E. E. Smith or E. E. "Doc" Smith; 1890-1965) was an American food engineer (specializing in doughnut and pastry mixes) and an early science-fiction author, best known for the Lensman and Skylark series. Smith's novels are generally considered to be classic space operas, and he is sometimes called the first of the three "novas" of 20th-century science fiction (with Stanley G. Weinbaum and Robert A. Heinlein as the second and third novas).