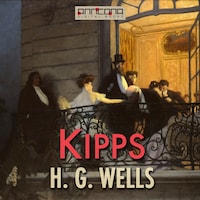 Humorous yet sympathetic, the perceptive social novel is generally regarded as a masterpiece, and it was his own favourite work.

Arthur Kipps, an orphaned draper’s assistant of humble means, unexpectedly inherits a large sum of money and that is when all his troubles begin. Wanting to marry above his social class, he has to learn how to lead a genteel life, but that is too much for him. You would think that his decision to revert to Ann, his boyhood love, would solve his problems and bring him back to earth and contentment. But even now the consequences of being wealthy are not easy to live with.

A poignant tale about ambition and social class in England in the early 20th century by H.G. Wells, a master of this genre, who drew on features of his own life to provide some of the material.

Though Kipps eventually became one of Wells's most successful novels, at first it was slow to sell; but 12,000 copies had been sold by the end of 1905, and more than a quarter of a million by the 1920s.

Biographer David C. Smith called the novel "a masterpiece" and argued that with Kipps, The History of Mr Polly, and Tono-Bungay, Wells "is able to claim a permanent place in English fiction, close to Dickens, because of the extraordinary humanity of some of the characters, but also because of his ability to invoke a place, a class, a social scene."