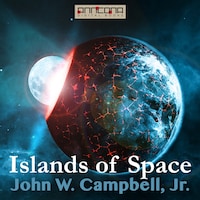 Islands of Space is a science fiction novel by John W Campbell Jr., first published in 1930.

As Earth's faster-than-light spaceship hung in the void between galaxies, Arcot, Wade, Morey and Fuller could see below them, like a vast shining horizon, the mass of stars that formed their own island universe. Morey worked a moment with his slide rule, then said, "We made good time! Twenty-nine light years in ten seconds! Yet you had it on at only half power...."

Arcot pushed the control lever all the way to full power. The ship filled with the strain of flowing energy, and sparks snapped in the air of the control room as they raced at an inconceivable speed through the darkness of intergalactic space.

But suddenly, far off to their left and far to their right, they saw two shining ships paralleling their course! They held grimly to the course of the Earth ship, bracketing it like an official guard.

The Earth scientists stared at them in wonder. "Lord," muttered Morey, "where can they have come from?"

John W Campbell Jr., (1910-1971) was an American science fiction writer and editor. As editor of Astounding Science Fiction (later called Analog Science Fiction and Fact) from late 1937 until his death, he is generally credited with shaping the so-called Golden Age of Science Fiction.