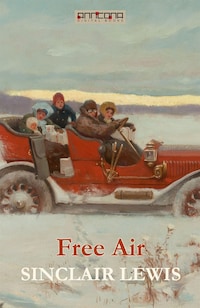 Free Air is a 1919 novel written by Sinclair Lewis.

This road trip novel is set in the early twentieth century and follows the experiences of an aristocratic New Englander and her father as they travel by automobile from Minneapolis to Seattle. She is wooed and won by a noble but simple commoner she meets along the way.

Lewis is at his usual wryly humorous self, poking fun at the upper class and treating the common people only slightly better.

Free Air is one of the first novels about the road trip, a subject around which the Beats (most notably Jack Kerouac) would build a cult following in the mid-20th century.

In 1930, he became the first writer from the United States to receive the Nobel Prize in Literature, which was awarded "for his vigorous and graphic art of description and his ability to create, with wit and humor, new types of characters."

His works are known for their insightful and critical views of American capitalism and materialism between the wars. He is also respected for his strong characterizations of modern working women.