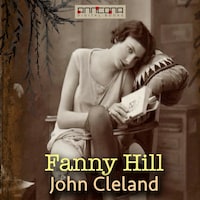 Fanny Hill: Memoirs of a Woman of Pleasure

This book has been notorious since it first appeared and had been banned several times and in several countries. It is a fictional work that details the adventures of an orphaned girl who ends up working in a brothel in London. Early on she falls in love with a young man named Charles, but only to end up being separated from him. She then recounts her experiences as a prostitute who, in spite of her circumstances, manages to retain her humanity and undying faith in true love.

Fanny Hill was the first widely-read English novel in the genre “Erotica.” It was written by Cleland as he was serving hard time at a debtor’s prison in London. Over the centuries, the novel has been repeatedly banned by authorities, assuring its preeminent role in the history of the ongoing struggle against censorship of free expression.

The novel is considered "the first original English prose pornography, and the first pornography to use the form of the novel". One of the most prosecuted and banned books in history, it has become a synonym for obscenity.

John Cleland (1709-1789) was an English novelist best known as the author of Fanny Hill: or, the Memoirs of a Woman of Pleasure.