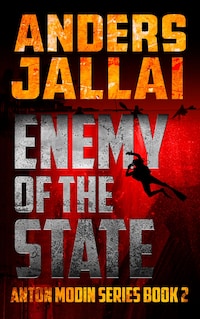 Enemy of the State

As a reward for services rendered to the state, Navy diver and former Air Force pilot Anton Modin is given permission to spend one night in the top secret archive of the Security Service to do research. He discovers a dossier covering the 1986 murder of the Swedish Prime Minister Olof Palme. Just as he is beginning to get to the details of the dossier, Modin is kicked out of the archive. That same night, the head of the Security Service dies of a massive heart attack.
When he narrowly escapes an attempt on his own life soon afterwards, Modin realizes that he has seen material not meant for his eyes. To stay alive, he has to follow the leads that uncover covert arms sales during the 1980s, the murder of an investigative journalist, a secret CIA-controlled organization called Crack of Dawn, and all the shadowy aspects and unholy alliances of the Cold War.
On his hunt for the truth, Modin meets Julia Steerback, a former operative of the Swedish Signal Intelligence and its U.S. equivalent, the National Security Agency. Together they challenge powerful forces, including the head of the Swedish Special Ops. Soon, a turf war breaks out in the archipelago to the north of Stockholm and Anton Modin’s tightly knit team of specialists and divers has to pass the ultimate test.

Enemy of the State offers the reader an abundance of detail about the powerful paramilitary forces at work beyond democratic control even today. Owing to his profound knowledge of intelligence matters, Anders Jallai has written a political thriller that is rooted in contemporary Swedish history and the secret and well-protected alliances with the NATO and its associated intelligence organizations such as the CIA and British MI6.
Enemy of the State is partially based on a true story.

“Anders Jallai’s superb, skillfully written thriller is on my list of the five best Swedish ones published so far.”
Iwan Morelius, Swedish Academy of Crime Novels

“Enemy of the State is unputdownable. But, at the same time, presents a challenge to the reader’s powers of observation and mental multitasking. Not least on account of the many questions that arise, and to which, for understandable reasons, there are no clear answers. The rapid shifts between documentary material and fiction could have made the novel difficult to read. However, Jallai manages to hold the book together because of his thorough in-depth research using that best of all glues: a burning (and contagious) passion for his subject matter. Jallai, a Swedish Frederick Forsyth, only better, should have a worldwide audience, while his choice of subject anchors him firmly within Nordic reality.”
Ragnhild Artimo, Forum for Economy and Technology, Helsinki

“This work of fiction contains a core of truth.”
Olof Frånstedt, Chief of Swedish Security Service 1965-1978

ABOUT THE AUTHOR:
Anders Jallai, Sweden's Number 1 author of political thrillers, draws from his experiences with the Swedish Navy Seals and the Swedish Air Force in the final years of the Cold War. His background as a fighter pilot, a commercial airline captain, and a professional diver naturally flows into his edge-of-your-seat thrillers. His first three novels were originally published in Sweden.