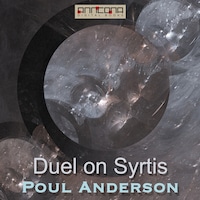 Duel on Syrtis is a science fiction short story by Poul W. Anderson first published in 1951.

The Man Who Meant To Kill A Martian

Bold and ruthless, he was famed throughout the System as a big-game hunter. From the firedrakes of Mercury to the ice-crawlers of Pluto, he'd slain them all. But his trophy-room lacked one item; and now Riordan swore he'd bag the forbidden game that roamed the red deserts . . . a Martian!

The night whispered the message. Over the many miles of loneliness it was borne, carried on the wind, rustled by the half-sentient lichens and the dwarfed trees, murmured from one to another of the little creatures that huddled under crags, in caves, by shadowy dunes. In no words, but in a dim pulsing of dread which echoed through Kreega's brain, the warning ran…

Duel on Syrtis was first published in Planet Stories in March 1951.

Poul William Anderson (1926-2001) was an American science fiction author who began his career during one of the Golden Ages of the genre and continued to write and remain popular into the 21st century.