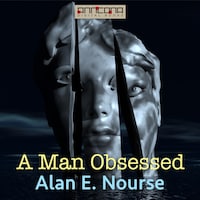 HE HUNTED HORROR THROUGH A MANIAC WORLD!

Jeffrey Meyer had a killing on his mind. It meant nothing to him that his towering Twenty-first Century world was going mad. He shouldered aside the rising tide of narcotics-mania, the gambling fever, the insatiable lust for the irrational. Jeff had his own all-consuming obsession—Paul Conroe must die!

After a five-year frenzied chase, Jeff had his victim cornered; he'd driven him into the last hideaway of the world's most desperate men—the sealed vaults of the human-vivisectionists. And Jeff knew that to reach his final horrible objective, he must offer himself also as a guinea pig for the secret experiments of the world's most feared physicians!

Alan E. Nourse's novel A Man Obsessed has the impact of Orwell's 1984 and the imaginative vigor of Huxley's Brave New World.

"The idea was drawn from my experience in minor grade medical guinea-pigging which I as a medical student have done from time to time.

The Hoffman Medical Center, originally conceived as a likely development in the future of medical treatment and research, is not modeled on any existing organization.

Medical mercenary work does, however, exist at the present time for testing new drugs, studying physiological effects, and in some cases testing rather dangerous procedures.

Cash is paid for participation, and certain groups of experiments have become very popular among medical students as a source of very easy, if slightly risky, income."

Alan Edward Nourse (1928-1992) was an American science fiction author and physician. He wrote both juvenile and adult science fiction, as well as nonfiction works about medicine and science. His SF works generally focused on medicine and/or psionics. Psionics refers to the practice, study, or psychic ability of using the mind to induce paranormal phenomena. Examples of this include telepathy, telekinesis, and other workings of the outside world through the psyche.

His novel The Bladerunner lent its name to the Blade Runner movie, but no other aspects of its plot or characters, which were taken from Philip K. Dick's Do Androids Dream of Electric Sheep?